January 28, 2010  Goodwill takes delivery of a 2010 Kenworth truck. The new vehicle will be used to  make store deliveries and home pick-ups.

March 31, 2010  The Goodwill board of directors conducted the 82nd annual meeting. The auditors report and election of officers and directors highlighted the event.  Board members elected to serve a one year term as officers were:  Barry Powell, President;  Troy Helman, Vice-President; Gary Schomer, Secretary; Don Garvin, Treasurer and Bill Tennis, Executive Director. An Executive Leadership Succession Plan was adopted by the board of directors.

April 27, 2010  Bill Tennis provided a program on Goodwill to the Exchange Club of Terre Haute.

May 14, 2010  Students from Meridian Elementary School located in Brazil, IN toured the Goodwill recycling center.

May 14, 2010    Goodwill ships first semi-trailer load of televisions for recycling.

June 8, 2010    The second semi-trailer load of televisions for recycling is shipped.

July 2, 2010  Goodwill ships the 3rd load of televisions for recycling.

July 8, 2010  Since June of 2009 over 293,000 lbs of computer items have been recycled with our Goodwill/Dell Reconnect computer recycling program.  Monitors ready for shipment 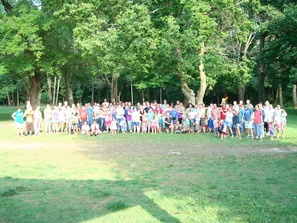 October 21, 2010  Goodwill is notified that it was selected as one of the Illinois Recycling Association's Recycling Heroes for 2010.

August 2010  A new roof was installed at our Terre Haute facility located at 2702 South 3rd Street.

November 12, 2010  Decals were installed on our newest truck.

December 20, 2010  Goodwill purchases the former Blockbuster building located at 6oo South 3rd Street in Terre Haute. Plans are underway to open a thrift store and donation drop-off site there in the near future.

February 2, 2011  A new Excel horizontal baler is installed in the Goodwill Recycling Center.

May 1, 2011  Goodwill officials present a check to the Terre Haute Children's Museum director. Money was raised by Goodwill employees and customers.

January 11, 2012  Goodwill announces that due to changes made by their TV recycling partner the TV Recycling Program operated by Goodwill will soon charge a fee for televisions. Fees will begin on February 1, 2012. 27" or less will be $5.00 and over 27" televisions will be $10.00.

July 13, 2012  A lease was signed paving the way to relocate the Sullivan Goodwill store to 800 W. Wolfe Street in Sullivan. 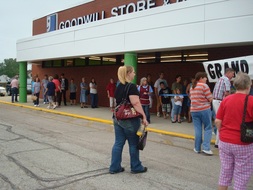 July 20, 2012   Over 120 Goodwill employees and their families enjoyed an evening swimming at Deming Park.

December 24, 2012  The e-Commerce department was moved to our facility located at 600 S. 3rd Street in Terre Haute.

January 4, 2013  A lease was signed for property located at 228  Broadway East in Mattoon, IL. Our 9th Goodwill store will
open sometime in late February or early March.

April 12, 2013 Volunteers from ISU were at Goodwill Industries for Donaghy Day sprucing up the landscape.

April 17, 2013 Earth Day at ISU, Marlene Cox talked to students about Goodwill Industries Recycling\Donation Center and how Goodwill has recycled since 1927.

April 19, 2013 Earth Day at Union Hospital. Deann Hayne and Marlene Cox sold many treasures that came from donations at Goodwill Industries. Teaching the public
that there are many ways to recycle.

April 20, 2013 Earth Day at The White Violet Center. Goodwill Industries was present sharing information about recycling to many who attended. Marlene Cox asked asked questions to attendees as to how they recycle and then in turn discussed how Goodwill Industries recycles; from clothing, household items, furniture, electronics to paper, plastic and so much more.

January 6 & 7, 2014 All Wabash Valley Goodwill's were closed due to a winter snow storm and below zero temperatures. 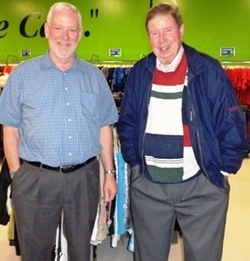 May 15, 2014 Our Executive Director Bill Tennis spoke to the local SCORE Group.

June 5, 2014  Goodwill was the program at the noon Kiwanis club meeting.

December 8, 2014 - Goodwill made #11 on the America’s Most Inspiring Companies list, published by Forbes Magazine.
To access the full article, please visit this link.

December 15, 2014 Goodwill's 87th Employee Christmas party was held at the Holiday Inn in Terre Haute, IN. Over 175 attendees were present.

April 7 – April 17, 2015 The existing tile floor on the main store sales floor and the cafeteria was refurbished into a polished concreted floor at our 2702 South Third Street location in Terre Haute, IN by QuestMark Flooring.

June 1 and 2, 2015 New front parking lot was pathed at our 2702 South Third Street location in Terre Haute, IN by Wabash Valley Asphalt.

June 10, 2015 The Main Store celebrated a grand re-opening/ribbon cutting ceremony at 8:30AM.  Employees, board members, media and members of the community joined us for the celebration.
Links to media coverage:
WTWO: http://www.mywabashvalley.com/news/local-news/goodwill-grand-re-opening
YouTube: http://wthitv.com/2015/06/10/wabash-valley-goodwill-re-opens/
WTHI: http://wthitv.com/2015/06/10/wabash-valley-goodwill-re-opens/
Tribune Star: http://www.tribstar.com/news/local_news/refurbished-goodwill-store-reopens/article_6558a529-4041-5c60-b362-d5e79b2c0be1.html

December 14, 2015 - 86th Annual Goodwill Christmas party.  Marlin Crouse was recognized for his 50 years of service, along with John Turner and Darrell Christy for their 40+ years of service.